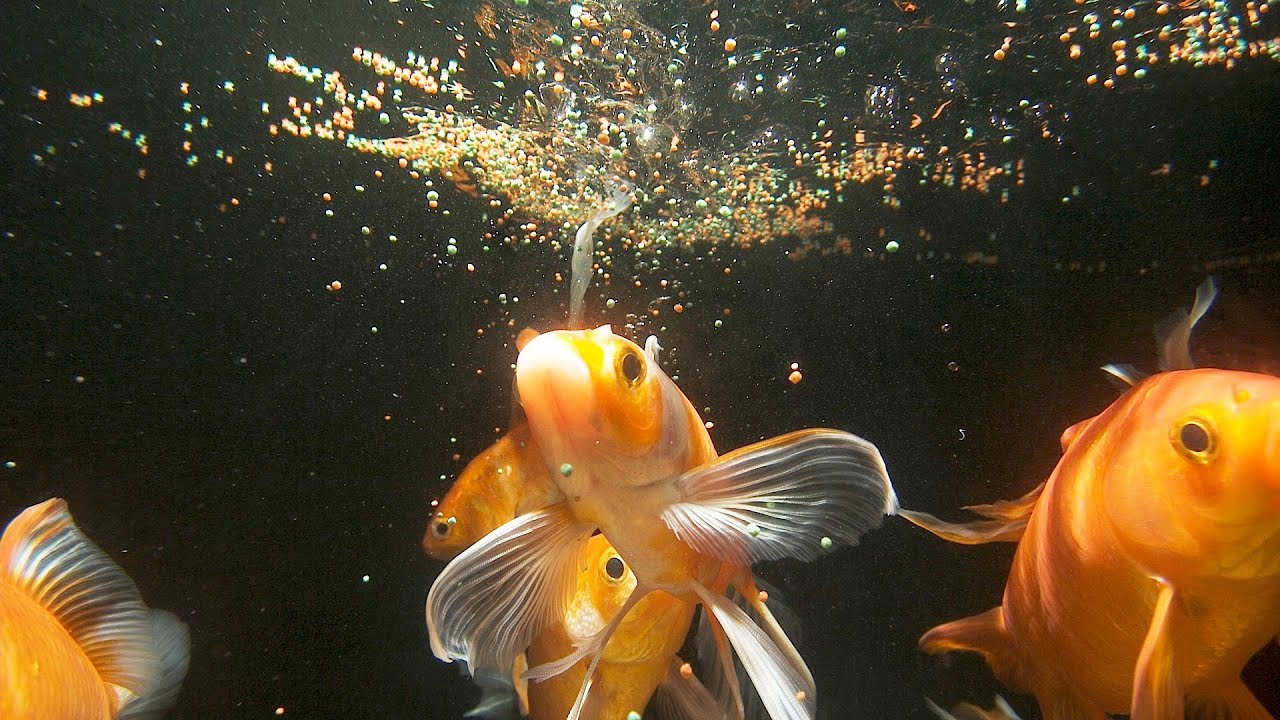 Nutrition is one of the most essential aspects of keeping goldfish healthy.

Everyone is aware that goldfish eat fish food. But what if you run out of fish food for your Goldfish? If you’re wondering what else you can feed your Goldfish besides fish food, you’ve reached the right place.

I’ll demonstrate you some good fish food alternatives for your Goldfish in this blog post.

You can feed your Goldfish vegetables such as peas, spinach, and kale, as well as fruits such as grapes, oranges, watermelon, apples, and bananas. Furthermore, some people feed their Goldfish oatmeal and cooked rice.

Goldfish is an omnivorous scavenger that can consume a wide variety of foods. In the wild, they eat plants, crustaceans, detritus, zooplankton, and insects such as mosquito larvae. However, they are fed dried flakes or pellet food in aquariums. Is that, however, all a goldfish can eat?

Many people only feed dried flakes or pellet food to their goldfish because they don’t realize they can eat more. Goldfish will eat almost anything if given the chance, but that doesn’t mean you should feed them any human food you can find.

The most famous aquarium fish in the world is the goldfish. The majority of goldfish add to the radiance of a fish lover’s home and life. However, as a goldfish lover, you should know what to feed, what assists the goldfish grow quickly, and feeding tips. This article will teach you everything you need to know about goldfish feeding.

What do Goldfish eat in the wild?

Goldfish are omnivorous scavengers. They consume both vegetarian and nonvegetarian cuisine. In the wild, they eat aquatic plants, algae, and other plants to supplement their vegetarian diet.

What human food can a Goldfish eat?

Boil the fruits and vegetables before feeding:

Always boil fruits and vegetables before feeding them to your Goldfish. You should also cut them into tiny pieces so that they can easily fit into their mouths.

Other foods for Goldfish:

Aside from fruits and vegetables, goldfish can consume live plants such as duckweed. You can get this plant for a very low price, and it is extremely nutritious for your fish.

Some people feed their Goldfish oatmeal and cooked rice.

How to Feed Peas to Goldfish (The Correct Way!)

Peas are a great food for Goldfish because they are nutritious and sink to the bottom of the tank. In comparison to other vegetables, peas are high in fiber. Fiber is essential for your Goldfish because it aids in the removal of waste from their bodies.

If the Goldfish does not consume enough fiber, it will be unable to expel waste from its body, which can lead to swim bladder disorder.

Because of their egg-shaped bodies, fancy goldfish are especially vulnerable to this problem. Their bodies’ organs are all tightly closed to one another.

So, if the fancy Goldfish is unable to expel even a small amount of waste from its body, it may develop swim bladder disorder.

As a result, you should feed peas to your Goldfish on a regular basis to keep them from becoming constipated.

But how much and how frequently should you feed the peas to your Goldfish?

How much and how often?

Feed 2-3 peas to each adult Goldfish and 1-2 peas to each younger Goldfish. You should also only feed them peas once a week.

If you adhere to these guidelines, your Goldfish will not become constipated.

Before feeding peas to your Goldfish, soften them, remove their skin, and cut them into tiny pieces to make it easier for your fish to consume.

Ways to soften and the Greenpeace:

There are several methods for softening the peas:

Fill a bowl halfway with water, add your green peas, and microwave on high for 30 to 60 seconds to soften.

This process is similar to the first: boil some water in a pot, add your green peas, and wait for a minute. After that, immediately add some cold water to the boiling water to prevent it from becoming overly soft.

Remove the skin of the green peas:

Once the green peas have softened, detach their skin by pinching or tearing it off.

This will prevent Goldfish from choking.

Cut the peas into small pieces:

For large Goldfish, it is no longer possible to cut the peas into small pieces.

However, if you have younger Goldfish, you should chop the peas into small pieces so that they can fit into their mouths and easily consume it.

If your fish is dehydrated, feeding them peas is an excellent way to help them. For three days, you should only feed your Goldfish peas twice a day.

Instead, it has any other severe infection or the water quality is not good and that’s what causing these problems.

It can survive for a couple of weeks without food, so you have plenty of time to get the fish food.

No, bread is poisonous to Goldfish.

Bread widens in the stomach, which can lead to dehydration in Goldfish. The gluten in the bread is incredibly difficult for the Goldfish to digest.

As a result, you should never feed your Goldfish bread. You can feed the other fish food mentioned above, or if you run out of fish food, Goldfish will wait until you get more.

Because goldfish can survive for several weeks without food. Although it is not recommended and is not a good idea in general, starving your Goldfish for two weeks is not a bad idea.

Bread is toxic to all fish, not just goldfish.

People frequently feed day-old bread to pond fish, not realizing that it is toxic to them and can even kill them. Bread is so toxic to fish that it is prohibited in the United Kingdom.

Overall, you should never feed your Goldfish or any other fish grade.

What nutrients do Goldfish require for its fast growth?

The Goldfish diet is typically high in protein and low in carbohydrates. When selecting food for your Goldfish, consider the following factors for optimal growth.

Goldfish, unlike other fish, need a high protein diet. A small goldfish necessitates more protein than a large goldfish.

Plant protein is ideal for feeding to Goldfish because it is very simple for them to digest.

The diet of goldfish should contain 5-10% fat. Animal fat is better for Goldfish than plant-based lipids when it comes to fats.

Goldfish, like humans, require vitamins for growth development. Most of the vitamins that we require, such as A, D, K, and Folic acid, are also required by goldfish.

Goldfish can produce the majority of their vitamins on their own, but there are some that must be supplemented.

Fortunately, the fish diet includes all of the vitamins required by your Goldfish. If Goldfish are fed a nutritious diet, vitamin deficiency is usually not an issue.

Furthermore, to be on the safe side, you can feed them frozen or live blood worms.

Goldfish, like us, require small amounts of minerals. The minerals in goldfish come from the water.

Mineral deficiency is rarely a problem in Goldfish.

Goldfish have a very low carbohydrate and fiber requirement in their diet. As a result, you should select fish food made especially for Goldfish.

Carbohydrate is usually referred to as “bulk” or “Ash” on the packaging of fish food, so before purchasing fish food for your Goldfish, make sure it is less than 10%.

High carbohydrate diets can lead to disease in your fish. If you have plants in your aquarium, Goldfish will bite on them and get their fiber from the plants easily.

We now understand the nutritional aspect of the Goldfish diet. However, how you feed your Goldfish is also very essential for their proper growth.

How to feed your Goldfish:

You may never seen a lot of people talking about this procedure but you should pre-soak the fish food before feeding it to your Goldfish.

Simply take a cup, fill it with aquarium water, add your Goldfish food, let it soak for 2-5 minutes, and then feed your Goldfish. This technique eliminates the risk of your Goldfish developing a dry bladder.

How often to feed your Goldfish:

You should nourish about two to three times per day to your Goldfish. You should occasionally give them frozen or live bloodworms.

In addition, if you do not have plants in your aquarium, you should feed them fruits or vegetables to meet their fiber requirements.

How much to feed your Goldfish:

Overfeeding a Goldfish is very easy. Goldfish always seem starving and they will always persuade you to feed them more food.

But overfeeding can be life threatening. You should feed your Goldfish the quantity of food they can consume within 2 minutes.

Or feeding the food equals the size of the eyes of your Goldfish is a general rule of thumb to follow.

Signs of overfeeding the fish:

There are a number of signs that demonstrate you are overfeeding your Goldfish:

When you overfeed the fish, the water becomes cloudy due to the uneaten food. This is most likely the first sign that you have overfed a fish.

(b) Fungus and mold:

If there are a lot of organic impurities in the fish tank, harmful bacteria like fungus and mold will grow very quickly. Mold can grow in your aquarium in as little as two days.

This harmful bacteria can be extremely dangerous to your fish, especially if it has a rotting fin or an open wound.

When there are a lot of organic impurities in your aquarium due to leftover food, you will also recognize low oxygen levels.

When there is leftover food food in your fish tank, it degrades and produces nitrate, which is beneficial to algae growth. As a result, the Algae will benefit from the nitrate and grow quickly.

(e) Change in the water PH:

If you have organic and inorganic pollutants produced by leftover food in your aquarium, you will notice a difference in the pH of the water.

(f) A rise in the ammonia level:

Uneaten food will decompose in the aquarium and produce nitrate, which will eventually raise the ammonia level in your aquarium, which is extremely harmful to your fish and can lead to their death.

What to do if you have overfed your fish

Because goldfish appear to be constantly hungry, it is very easy to overfeed them. Overfeeding, on the other hand, is extremely harmful to Goldfish.

Because goldfish lack a stomach, they can cause digestive issues. Furthermore, if you overfeed the fish, some leftover food food will remain in the tank.

As previously stated, uneaten food can cause a variety of issues. So, if you overfeed the fish, the first thing you should do is eliminate the uneaten food from the water.

Ways to remove uneaten food from the tank:

There are several methods for removing uneaten food from the tank, which are as follows:

(a) Do a partial water change:

You can erase the uneaten food from the water with a fishnet.

If your aquarium has substrate, uneaten food may become trapped in it.

Using a siphon is the simplest way to eliminate uneaten food from water.