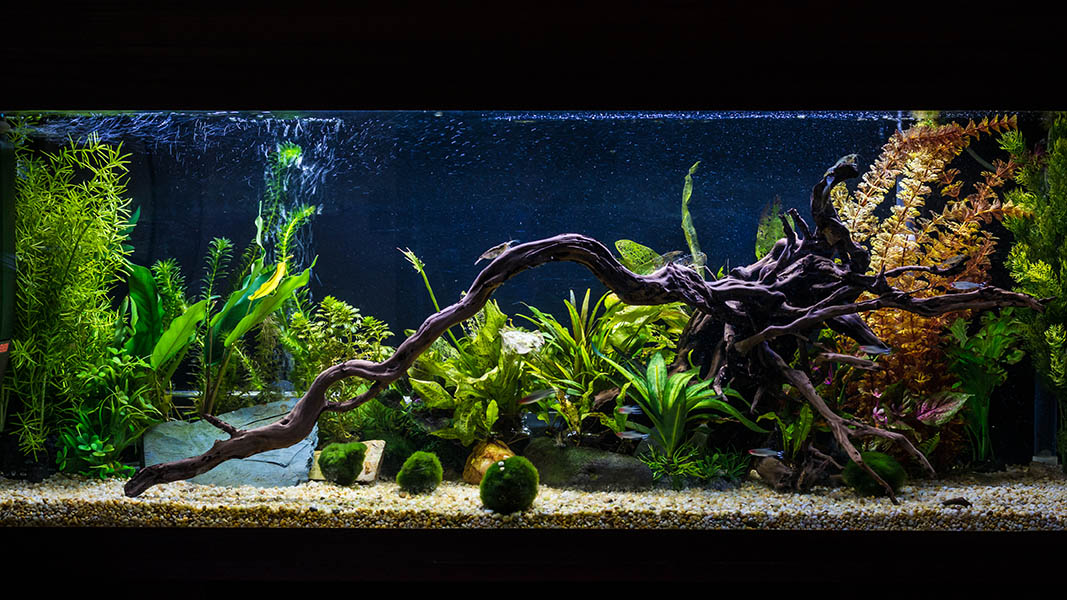 For fish tanks living plants are extremely beneficial. From water soaking harmful nitrates to keep the fish safe. provide shelter for fry and shy fish and create a beautiful and verdant aquascape for the onlooker to enjoy. Living plants require a definite amount of maintenance to keep them good-looking and healthy. The biggest disadvantage of living plants was this.

The good news is that you and your fish may still have a natural green presence in your aquarium by using Marimo moss balls instead of normal aquatic plants.

What is Marimo Moss Balls?

Marimo means ”seaweed ball”. Marimo is a Japanese word. In nature, Marimo moss balls begin living in freshwater lakes in limited locations, involve Japan, Iceland, Scotland, Estonia, and more recently Australia. The vibrant green spheres are made of a rare form of algae but not made of seaweed or moss.

There is nothing solid inside the ball. The organism grows slowly outward at a rate of around 5mm every year because the organism is made up of a mass of algae. The organism is ultimately reaching between eight and 12 inches in diameter.

Marimo balls, in particular, are difficult and nearly impossible to destroy, making them ideal for newbies. These living spheres can survive for over 100 years.

How many Marimo balls to use per gallon?
As a general principle, it’s suggested that you keep between one and three Marimo moss balls per gallon of water

Why keep Marimo moss balls in the aquarium

The waste is produced by fish and other living organisms. The biological element of the aquarium filtration system deals with ammonia and nitrites, the end product of the process is nitrates that are still harmful to your fish when the level rise above 200ppm(parts per million).

To control the level of nitrates in the water the Partial water changes help a lot, moreover, living plants and algae can also help.

From the water, Nitrates are absorbed by Marimo moss balls to use as fertilizer and also remove small amounts of phosphates, debris, and ammonia.

Moss balls from water take up CO2 and release oxygen as part of photosynthesis. If you don’t desire air stones disrupting the water surface, a silent substitute is made by few moss balls.

Moss balls are particularly maintenance-free. In the fresh water, all the balls need to be happy, dim lighting and dappled and waste on which to feed. The moss balls will eat the waste produced by your fish and other livestock. So, you don’t need to produce fertilizer.

The moss balls grow very slowly and uniformly so there is no need to trim moss balls. They simply increasing in size very slowly over the year while keeping their velvety and fluffy appearance.

Algae in your aquarium can be a nuisance when it spreads over your decoration, other plants and covers the glass. Like other algae, Marimo moss balls utilize the same nutrients, effectively starving them. Adding some moss balls to your aquarium won’t kill other algae species. However, they will certainly make it much harder for the undesirable to thrive.

A coating of algae that quickly becomes ugly as accumulated by regular plants. To clean plant leaves frequently results in damage to the plants and is time-consuming. Like sponges, Marimo moss balls suck up debris and dirt. Moreover, once the balls are full, the detritus start to leach out into the water.

You put the ball back into your aquarium once the ball is empty of water and accumulated gunk.

Your filtration system the Biological filter media and the substrate in your tank provide a valuable surface area on which colonies of beneficial bacteria can grow. Those bacteria are essential to process the nitrites and ammonia in the water and keep the nitrogen cycle moving.

In nature, across the bottom of the lake, moss balls are shaped by the water current’s constant movement. They are spherical because the spheres of the algae are rolled around the substance. The movement as well helps expose all sides of the balls to a degree of light, keeping the algae healthy and preventing dead patches.

The balls are more likely motionless in your aquarium and will, therefore, lose their space over time. Simply take one marimo ball in the palm of your hand and gently roll it to keep marimo balls in shape.

Many aquarium plants that have high pH don’t thrive in water. But pH range of between 6.0 and 8.4 is tolerated by moss ball and remains healthy.

Moss balls tend to gather a coating of debris and nutrients over time. Moreover, many aquarium creatures love to capitalize on them. African dwarf frogs, shrimp, fish, and snails enjoy nibbling on particles of food snagged on the moss balls.

Betta fish are often kept alone because they are aggressive. However, betta fish are intelligent and curious creatures.
Moss balls are the best betta fish companion. The fish used comfy spheres as a cushion and love to rest on the balls. By rolling the balls around on the substrate and picking off scraps of when bettas entertain themselves when they want a snap after playtime.

Numerous species of Ornamental snails can make a useful and pretty assertion to your community. Mollusks have the habit of munching on live plants. Snail doesn’t care about the moss balls. Snails seem content to graze on the food scraps that they find there rather than eating the algae spheres.

Live plants drop old leaves and grow new ones in place of old leaves. Sadly, that means before they start to decompose, You have to remove all those dead leaves, Polluting the tank water. As long as the moss balls are bright green, intact, healthy, fluffy the Marimo doesn’t shed!

You need to dose a small quantity of salt in the aquarium to treat minor injuries. The salt is not liked by regular aquatic plants. But moss balls will tolerate it. This also means that you can keep moss balls in a brackish tank where other plants would fail.

If you own fish species that are confirmed diggers, regular plants can be easily uprooted, and you spend your life replanting them in the substrate. Moreover, some species like goldfish and silver dollars are very fast to make a meal of tender shoots, leaving your precious plants looking tatty and ragged.

The moss balls do not need to be anchored at all. When vacuuming the substance and cleaning the tank that makes life very easy for you. You just need to do is push the moss ball aside and clean beneath and around it.

15. Are Inedible to Fish

Even though your fish and other tank occupants will enjoy nibbling food remnants from the surface of moss balls, nothing will eat them. Goldfish are voracious plant eaters, won’t eat a moss ball.

It’s very good news if you have plant-destroying species in your tank, so you can enjoy the many benefits that live plants bring without fear that your greenery will be eaten for lunch.

But you dunk it in chlorine-filled water, try to put it in a marine tank where the salinity levels are higher put it in water that’s devoid of nutrients, you won’t kill a Marimo moss ball. Considering, your tank is well-maintained and the lighting is not too bright, the marine should fine.

For white flecks keep an eye out on the moss balls, which indicates disclose to brown patches or light which means they’re getting insufficient light.

Most aquatic plants spread or self-produce, gradually taking over the tank unless they are trimmed or thinned off regularly. The Marimo moss ball, on the other hand, is one of the slowest-growing aquatic plants available. Moss balls only grow 5mm per year, even when housed in ideal growing circumstances and given a constant supply of nutrients.

That means the moss balls will never grow to the size of softballs and take over your tank in a few months!

18. Are Super-Easy To Propagate

The moss ball is no exception to the norm that most popular aquarium plants are easy to reproduce.

Simply rip a piece off an existing specimen, roll it into a ball, and place the new plant in your tank to make more moss balls. The sole disadvantage of this method of propagation is the plants’ modest development rate.

Unless I need a few tiny ones for my aquascaping design, I prefer to buy additional moss balls.

When placed in a large pool of water, Marimo will breed. Splitting apart your Moss Ball Pets is not recommended. You will likely harm it, causing it to die.

Marimo balls are considered good luck charms in Japan, and they are frequently treasured as family heirlooms because they have been known to live for 200 years or longer.

Marimo moss balls are a great plant substitute since they are easy to care for and can withstand a wide range of water conditions. So, if you want to add some color to your aquarium and want something a little different, a few of these interesting tiny organisms will only help your setup.