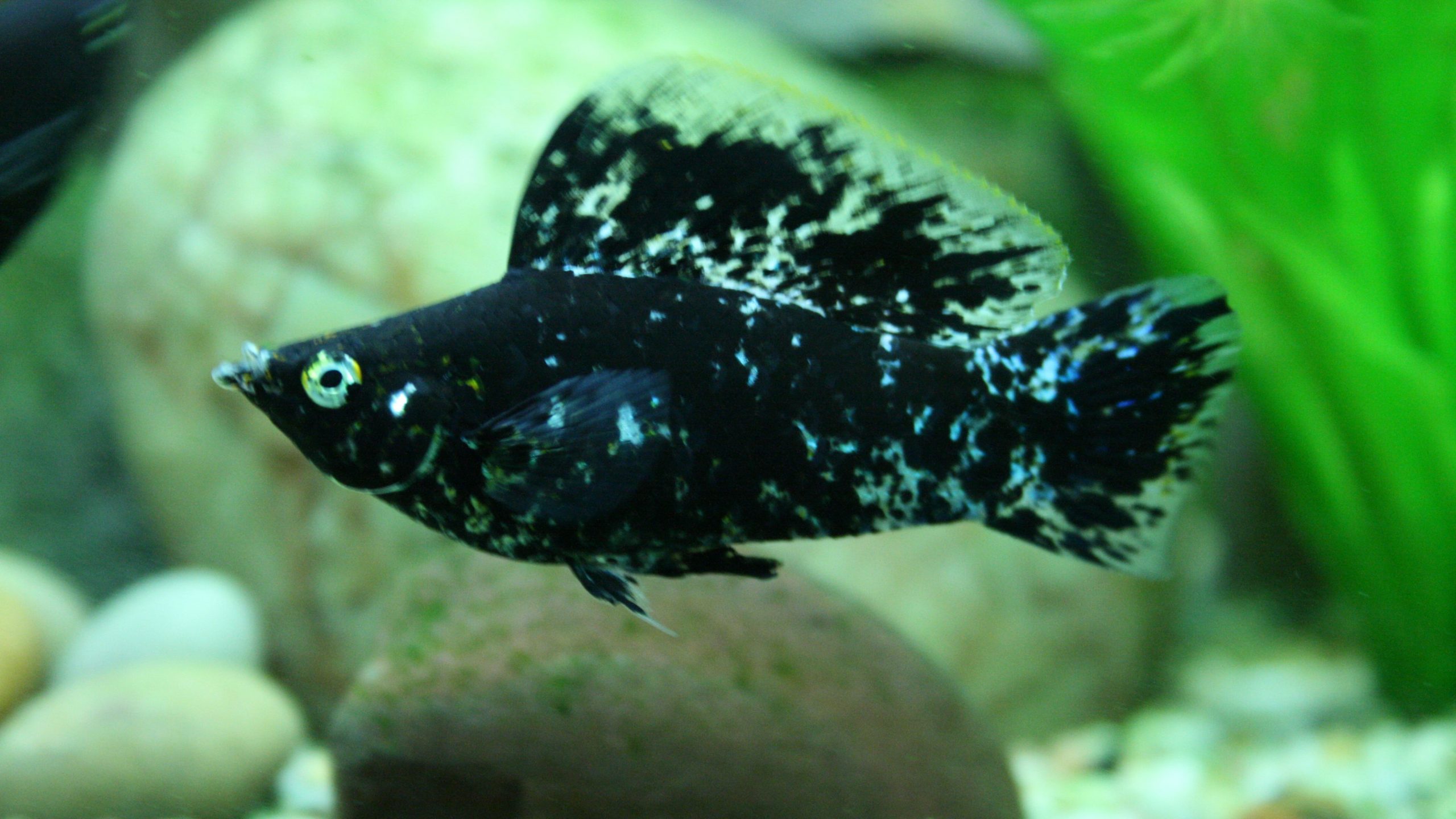 One of the most well-known and popular freshwater fish species is the Molly. Even if you are new to fish keeping, you have probably seen or heard of this fish.

In this post, we’ll go through the basics of this species and answer the age-old question of how long do mollies live. Mollies live for roughly 5 years, to give you a quick answer.

However, a variety of factors influence their lifespan, including diet, tank conditions, genetics, and so on. This post will go over each of them. Let’s learn more about the lovely Molly fish!

You should know how to care for molly fish by now. However, you may now be concerned about their long-term viability. To ensure that buying and caring for your molly fish is worthwhile.

You will learn more about how long do mollies live if they are healthy in this article. We’ll also go over the three things that can help you extend the life of your mollies so you can enjoy them for even longer.

Molly (Poecilia sphenops) is a livebearer that belongs to the Poecilia family. It is also known as the short-finned molly or common molly. They’re a popular freshwater tank species because they come in a variety of colors and have a fast growth and reproduction rate.

Despite the fact that there are 39 different types of mollies, most of them have a similar body form. With a triangular-shaped head, the body is flattened.

Mollies are native to Mexico’s freshwater streams, but they’ve also been spotted in marine and coastal brackish environments. Mollies in the wild are dull and silvery in color, and they are generally hardy and adaptable fish.

Also read – How Long Can Fish Live Without Food?

Over the years, selective breeding has resulted in 39 different molly variations. But we’ll focus on the most popular ones, which are as follows:

The most popular breed of Molly on the market is the short-finned molly, also known as the common molly.

2. White molly is a molly that is white in hue.

3. Because of its golden color, the golden molly is known as “24 karat Molly.”

4. Balloon molly: Due to a hereditary abnormality, this breed has a malformed spine that gives it its appearance. Despite common speculation that their deformity causes them to have shorter lives, balloon mollies may breed and live healthily.

However, it has been reported that this breed does live a little shorter than the average breed. Most likely due to genetics and the overall environment in which they are housed.

5. The lyretail molly is a breed with a unique caudal fin structure.

6. A silver-colored molly with black speckles, the Dalmatian molly.

Mollies are a gentle kind of fish that is ideal for beginners. Males occasionally display aggressive behavior, but only in crowded tanks or during the breeding season. They are social and friendly fish who like the company of other tank mates as long as there is enough room for everyone.

All of these fish are calm and nice. Cichlids are the ones you should avoid at all costs since, depending on the breed, their nature is territorial and violent.

Also, despite the fact that Mollies are not a schooling breed, they tend to stick together. Keep in mind, however, that the group should primarily consist of females because males like harassing them for the purpose of reproduction.

Mollies aren’t picky when it comes to food, but they do enjoy a plant-based diet and algae. They enjoy scraping algae from the tank walls. As well as lettuce, spinach, zucchini, and other similar vegetables from the kitchen.

If you want to give them even more diversity in their food, you might try some homemade meals. They can also eat flakes and pellets, which are dry foods.

Mollies are livebearers, which means that their eggs grow inside the female’s body before being discharged live and able to swim and feed. This makes them the easiest fish to breed, which is one of the reasons for their widespread popularity.

Even beginners can breed them because reproduction is so simple – you won’t need a separate breeding tank because they’ll do it in the main one. However, you should be aware that the fry will be eaten by both the parents and the other tank mates, so separate them as quickly as possible when they are released.

Despite their hardiness, Mollies are subject to common ailments such as shimmies, a Molly condition that prevents the fish from swimming properly.

The cause is unstable temperature and ammonia spikes, which they can recover from with correct treatment. They can also contract other common fish diseases, such as:

White Spots (Ich or Ick): If you find white spots on your fish, it’s most likely a parasite-caused skin condition. It’s simple to cure as long as you catch it early and can get medication quickly.

You’ll also notice that the infected fish rubs itself against the tank’s walls or wood, which is why the condition is known as itch.

What should you do about it? Raise the temperature of your tank to 80 degrees Fahrenheit before adding medication like Seachem ParaGuard; the amount is listed on the packaging.

Add 1 teaspoon of salt to your tank as an alternative. This should not be done for longer than 7 days, and then a complete water change should be performed. The outcomes should be visible at that point.

Velvet is caused by a parasite called Oodinium. Which affects Molly’s skin and causes small golden cysts to appear. This disease is usually fatal if not identified early because it spreads swiftly until the entire body of the fish is afflicted.

What should you do about it? Copper treatment has been proved to be the most effective. It’s also a good idea to turn off the tank lights until the treatment is finished. After that, a complete water change is recommended to eradicate any remaining parasites.

Fin and tail rot is an infectious or bacterial illness that affects the fins and tails of fish. Ammonia surges and poor cleanliness might cause fungus and bacteria to grow in the tank.

During unfavorable tank conditions, a fish’s fin or tail is usually harmed, and this is when the sickness spreads.

What should you do about it? Remove all infected fish from the tank and place them in a smaller one. Start treating them with antibiotics right away (such as Maracyn, Maracyn 2, Tetracycline, or Seachem ParaGuard).

If you don’t want to use antibiotics, you could try the fungal treatment. Also, perform a complete water change in the source tank.

A protozoan is a single-celled tiny animal that feeds on the fish in your aquarium and can be found in polluted water. You’ll notice it when you discover white flecks on your fish’s skin.

As well as when it becomes lethargic and refuses to eat. The protozoan attaches itself to the skin and travels through the body, eventually entering the bloodstream.

What should you do about it? Maintaining a constant temperature in your tank will help you from contracting the sickness. Use a drug like Malachite Green or Formalin in the early stages and copper treatment in the later stages.

Do a major water change after the treatment, and you should see results.

Mouth Fungus and Columnaris: this is a bacterial infection that might look like a fungal infection. White threads on the mouth or body of your fish will indicate it. When the fish is breathing heavily, it creates a lot of mucus. Sores may emerge in the later stages.

What should you do about it? It is critical to recognize it as soon as possible. In that situation, antibiotic treatment should be started right away (try Maracyn or Formalin). One teaspoon of salt should be added to your aquarium every three days.

After the symptoms have subsided, perform a complete water change. Some owners even dip their fish in a potassium permanganate dip solution containing 10 mg per liter.

However, you must be careful with the dosage; otherwise, your fish may be burned, and no one wants to harm their fish, right?

How Long Do Mollies Live?

So, what is the average lifespan of mollies? The lifespan can range from 5 to 10 years, depending on overall health, genetics, food, and other factors. Mollies are not thought to be long-lived species.

But their sensitivity varies depending on the breed. Inbred species, such as Balloon Mollies, for example, tend to live a few years less, despite varied perspectives on the subject.

Molly’s longevity is influenced by a number of things, which we’ll go over in more depth today.

In any living species, genetics is the most important aspect and one of the most important building blocks of a lifetime. There’s nothing you can do if your fish’s genetics aren’t good. To avoid purchasing a fish with poor genetics, look for a reputable and trustworthy breeder.

Who focuses on breeding healthy fish rather than profit. Many future generations of Mollies will be harmed by excessive inbreeding and poor living conditions. It’s no surprise that fish purchased from pet stores live shorter lives than those obtained from breeders or the wild.

Another crucial aspect is a high-quality diet. This is true not only for breeders but also for individuals who keep aquariums. Both will have an impact on your fish’s longevity. Mollies are omnivorous, however, their normal diet in the wild consists primarily of plants and algae.

Choose only high-quality brands if you’re going to eat dry food. However, it’s still a good idea to incorporate variety into their diet, incorporating both prepared and dried foods.

It’s also crucial not to overfeed them; make sure there’s no leftover food in the tank. Since this will contaminate the water and affect the parameters.

When it comes to water factors, they are a critical role in determining lifetime. The following conditions and parameters should always be stable:

Try to do as many checks as you can on a regular basis and use a high-quality filter.

Even though mollies are tough fish, they can become agitated, and stress always leads to illness. As a result, make sure they have a stress-free atmosphere. That means you should pair them with compatible tank mates.

Moreover, maintain an appropriate male-to-female ratio, provide ample space for everyone, provide hiding spots, and moderate lighting, among other things.

When it comes to sex and lifespan, there isn’t enough information to say if male fish live longer than female fish or vice versa. A female Molly who spawns frequently will have a lower life span owing to the physical stress.

While a male Molly who mates frequently will have a shorter life span. That is why it is critical to maintain an appropriate sex ratio and to separate the sexes from time to time so they can rest.

To sum up, we’ve covered the fundamental characteristics of Molly fish as well as their longevity. We’ve also discussed how to make your Molly fish happy and healthy in general, as well as how to ensure that they live longer.

Mollies may be hardy and easy to care for. But that doesn’t mean they don’t deserve the same amount of love and attention as other, more delicate species.

They are deserving of all the affection they can receive, and as a result, they will live longer.

Have you ever had a Molly as a pet? If so, how long have you been around this breed? Would you like one if you don’t already have one? Thank you for reading, and until next time, good luck with your fishkeeping!