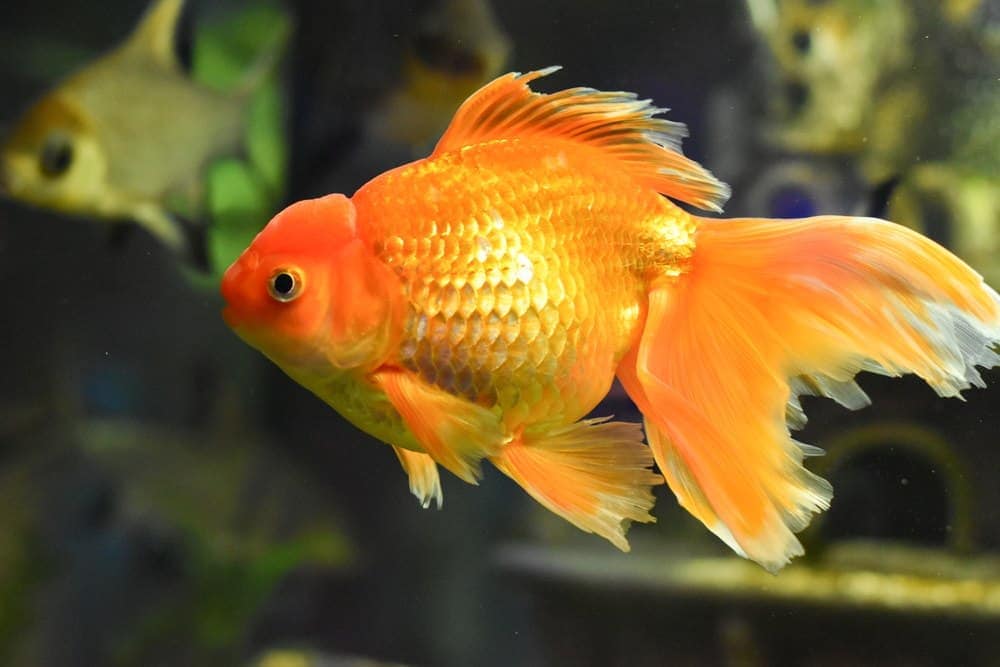 Goldfish can survive for approximately two weeks without food. During this period, they scavenge and feed on algae in their aquarium. Goldfish in ponds can go indefinitely without feeding, depending on the size and availability of algae and insects.

So if you are away from home for two weeks and are unable to feed your fish, it will be fine.

What if you have goldfish in the pond?

Goldfish in the pond can easily survive for several weeks without food. A pond typically contains a variety of insects, algae, and other organisms that provide food for goldfish.

If you’re worried, you can put some plants in the pond and the goldfish will eat them when they’re hungry.

When compared to other specially bred goldfish, common goldfish are among the largest species of fish, reaching up to 18 inches in length. A goldfish can live comfortably in a 20-gallon tank alone, or in a tank of 30 or more gallons with a tank mate. However, experts suggest a tank size of 40 to 55 gallons for two goldfish.

Goldfish require a constant temperature in their water. It is essential to select water filters that do not heat the water. Furthermore, keep your aquarium away from bright lights and places where it is likely to obtain heat from the outside.

Natural lighting may not only cause temperature changes, but it may also promote algae growth in the aquarium.

There are several options for providing water for your goldfish. You can purchase oxygenated bottled water from your local pet store to use in non-aerated fishbowls and aquariums. You can also use a de-chlorinator to treat your tap water and use it for your goldfish.

Keep in mind that you should never drink untreated tap water. Tap water contains impurities such as chlorine, heavy metals, and other contaminants that can kill your fish.

Goldfish are not a particularly aggressive species of fish. They get along well with their tankmates. Their tankmates, on the other hand, should be living in water conditions similar to those of the goldfish.

If you are going to be away from home for more than two weeks, you will need to make arrangements to feed your fish.

1.Request that a neighbor or a friend feed your fish.

The easiest arrangement is to ask a neighbor or friend to feed your fish while you are away from home.

How frequently should the fish be fed?

They should feed your goldfish at least twice a day. However, now that we know that goldfish can survive for about two weeks without food, you can ask a neighbor or friend to feed your fish once a day, or even once every two to three days will suffice.

Feeding goldfish less than three times per day is obviously not a good idea. And it will undoubtedly have an impact on their development.

You should tell them the amount of food they should feed your fish.

How much should you feed your goldfish at one time?

A general rule of thumb is to feed your goldfish the amount of food it can consume in 2 minutes, or feed it food the size of its eye.

Once you’ve determined how much food your goldfish should consume, a pill organizer is a good way of make feeding your goldfish easier for your neighbor or friend.

Fill each little box in the pill organizer with the amount of fish food your goldfish require, and then your neighbor or friend will only have to empty one box at a time in your aquarium.

How often should I feed the goldfish in the pond?

The amount of food you should feed your goldfish is also affected by the temperature of the water and the time of year.

For example, in the spring and summer, the water is warm and the fish are active, so you’ll require to feed more food.

In the winter, on the other hand, you will require to feed significantly less food.

2.Use an automatic fish feeder

When you’re on vacation, another quick and easy way to feed your fish is to use an automatic fish feeder.

The automatic fish feeder is fantastic; all you have to do is fill the automatic feeder with your fish’s favorite fish food and set the timer, and the food will be distributed automatically.

Furthermore, some automatic feeders can store fish food for up to 6 weeks, giving you plenty of time to enjoy your vacation.

Slow-release fish food is probably the most cost-effective way to feed your fish while on vacation.

(a)Weekend feeder blocks– This fish food will last your fish three days. So, if you’re looking for a weekend vacation, these blocks are ideal.

Here is a table with some slow-releasing food products, their validity, and which types of fish they are appropriate for.

The longest-living goldfish species are common goldfish, Comets, and Shubunkins.

They require more space than fancy goldfish, but given enough space in a large tank or pond, they can live for well over a decade.

How long do fancy goldfish live?

Because fancy goldfish have been selectively bred to have certain characteristics, such as round bodies, flowing fins, and bulging eyes, they are frequently more susceptible to health issues. Swim bladder issues, for example, are more popular in fancy goldfish.

Fancy goldfish are also more sensitive and less tough than common goldfish. If you want your fancy goldfish to live a long time, you’ll require to be extremely cautious about water quality.

But don’t be disappointed! It is still possible for fancy goldfish to live for many years. A fancy goldfish can certainly reach their tenth birthday with proper care and a bit of luck.

Carnival goldfish live for how long?

Carnival goldfish are not a subspecies of goldfish. A popular goldfish is usually the type of goldfish you win at a fair or carnival.

This goldfish has the ability to live for many decades. However, this is far less likely with carnival goldfish than with fish purchased from a reputable pet store or a breeder.

There are several reasons for this, including:

Prior to being won, carnival goldfish are frequently kept in disgusting conditions. For example, they have typically spent a long time in a tank with many other fish before being transferred to a small bag. This is extremely harmful and stressful for the fish.
Carnival goldfish are unlikely to have come from a reputable pet store. As a result, they are likely to be biologically weaker than well-bred goldfish.
Because carnival goldfish are an unexpected prize, most new owners are unprepared to keep goldfish. Most carnival goldfish winners do not have a cycled tank or pond ready for the fish, and many do not understand the fundamentals of goldfish care. It is often too late for the fish by the time they learn and get a larger tank.

The larger your tank or pond, the more probably your fish will live for a long time.

This is due to the increased likelihood of maintaining good water quality and stable water parameters in a large body of water.

Larger tanks and ponds are also more likely to be well cycled and to contain more oxygen in the water. All of this can significantly improve your goldfish’s chances of living a long life.

How long can goldfish be kept in a bag?

The length of time goldfish can live in a bag is highly dependent on the type of bag.

Some goldfish are delivered from stores to new owners, which means they may have to survive in a bag for up to two days. Stores accomplish this through the use of special packaging and ‘breather bags.’

A goldfish can survive in a normal bag for 8 to 12 hours. The amount of time they survive is determined by how rapidly they use up all of the oxygen.

Goldfish can live in a bowl for how long?

Goldfish generate a lot of waste.

No amount of water changes will get rid of it all in a small bowl.

As a result, waste will accumulate in your bowl and eventually poison your goldfish.

A large tank or pond is required to properly care for goldfish and allow them to live longer, healthier lives.

How long do goldfish live in a pond?

A pond is the ideal environment for goldfish to live for a long time. Ponds have a large amount of water and a large specific surface area, which is ideal for introducing a lot of oxygen into the water.

There is no reason why your goldfish should not be able to live in a pond for more than 10 years, potentially 20 years or more.

All you have to do is keep them safe from predators like birds and ensure that temperature and pressure stay within an acceptable range even in the winter.

How long can goldfish survive in the absence of food and water?

A goldfish that does not have access to food will eventually perish from starvation. While goldfish that are not in water will suffocate in a short period of time.

You might be surprised at how long goldfish can survive without food or water.

Goldfish can go for at least two weeks without eating anything. However, this is not advised.

If you’re going on a short vacation, your goldfish are more likely to be over-fed than they are to starve. Goldfish are frequently overfed by automated feeders or well-intentioned pet-sitters who don’t know any better.

One goldfish went 134 days without being fed. Though it wasn’t completely devoid of food. The fish survived on algae and scraps of leftover food from previous meals that were still in the tank.

How long do goldfish survive when they are not in water?

Water is extremely essential to goldfish for obvious reasons! A goldfish out of water, as you might expect, will not live long.

However, if you expected them to die in seconds or minutes, you may be surprised.

Goldfish can survive for up to an hour without water.

This could be extended even further if there is some water present, such as a small puddle. Some goldfish have survived on the floor for up to three hours because they brought some water with them when they jumped out of the tank.

Being out of water is, of course, highly hazardous for a goldfish. You should never intentionally take your goldfish out of the water.

If your fish accidentally jumps out of their tank, you should replace them as soon as possible.

Goldfish can survive for approximately two weeks without food. However, leaving your goldfish unfed for that long is not a good idea. So, if you’re going on a long vacation, you should make plans to feed your goldfish.

The most basic arrangement is to ask a neighbor friend to feed your fish while you are away.

You can use an automatic fish feeder if you don’t want to trouble anyone.

Using slow-release fish food is also a low-cost way to feed your fish when you are away from home for an extended period of time.