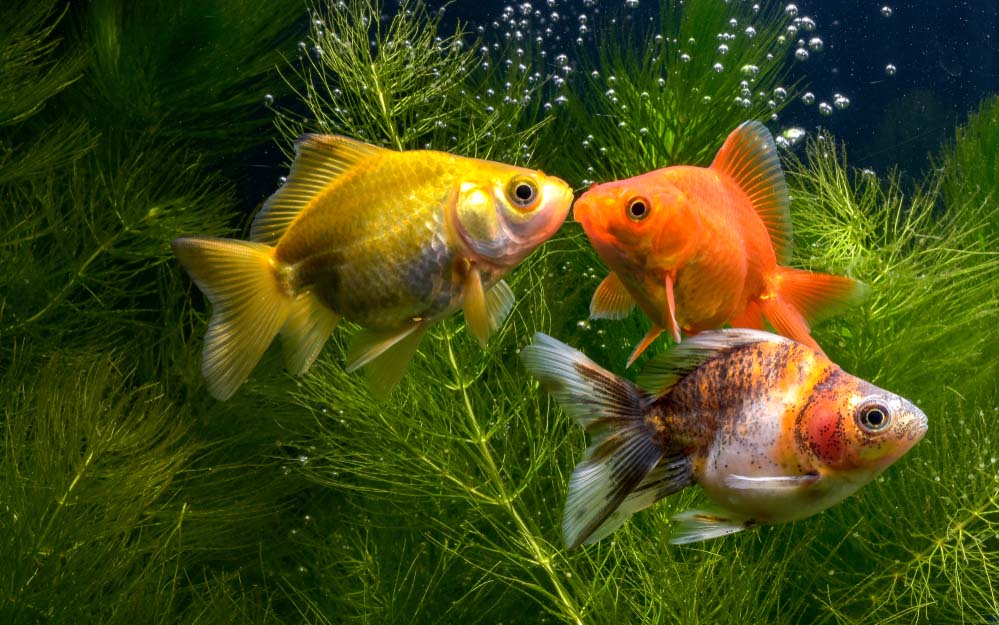 So, how quickly do goldfish grow?

This question does not have a single answer. There are numerous factors that influence a goldfish’s growth rate. The growth of the goldfish is determined by the water quality, feeding, tank size, and other general maintenance such as the maintenance of the water heater, filter, and so on.

Goldfish can increase up to 6 inches in a bowl or small aquarium, and they can grow up to 14 inches in ponds.

How to keep a healthy environment for goldfish development:

Because goldfish is a cold-water fish, it does not like hot temperatures.

However, you should maintain the water temperature in your aquarium fairly warm, between 65 and 75 degrees Fahrenheit.

If the water becomes too cold, the goldfish will go into hibernation, slowing its growth.

When it comes to the better development of a goldfish, feeding is critical.

Because goldfish are omnivorous, they can consume other small fishes such as guppies, as well as vegetables and live plants.

The algae can even be eaten by goldfish. It is actually beneficial to their health.

This is why the goldfish in the pond grow quickly because they eat algae, which most aquarists dislike in their aquariums.

Because goldfish lack a stomach, they digest through their intestines, necessitating frequent feedings.

Goldfish should be fed two to three times per day.

Also, don’t feed them all the time. Maintain a reasonable amount of time between feedings. Maintain a similar feeding schedule as well.

It will keep the goldfish energized for the duration of the day.

When it comes to the rate of growth of the goldfish, tank capacity is one of the factors to be considered.

Goldfish generate a lot of waste, that is why they cannot grow in small fish bowls.

Because the tiny fishbowl quickly fills up with ammonia.

When it comes to goldfish tank size, the larger the better!

A 20 gallon aquarium tank is optimal for a goldfish, i.e. 20 gallon per goldfish.

It will have plenty of room for swimming and ammonia dilution.

However, if you are just beginning out, you can put two goldfish in a 10 gallon tank, but they will not grow to their full size unless placed in a larger tank.

Because goldfish are messy, they generate a lot of waste.

Goldfish grow about one inch per year, with the fastest growth occurring during their first few months of life. Unlike most other popular pets, goldies continue to grow throughout their lives. Goldfish do not grow in spurts, but rather in stages, based on their environment and other factors. A goldfish in an exterior pond, for example, will develop more in the spring and summer when the water is warmer, and less in the winter when the temperature decreases.

How Quickly Do Baby Goldfish Grow?

A goldfish’s growth rate will be enormous during the first few months of life! In fact, after hatching, you may observe that your goldfish fry have doubled in size (in perfect conditions).

Here’s a closer look at what to expect as your goldfish fry grows.

Goldfish eggs hatch in 4 days, and the fry will be swimming around your tank or pond after that. Goldfish fry are only 3/16′′ (4.5mm) long when they hatch! However, after three days, their size should have grown to 5mm.

The fry should be about 7mm in size after the second week. To put it in context, that is a 40% increase in size! During week 2, you should also observe that the tail fin is becoming more defined.

You’ll observe more explosive growth in the third week. It is entirely possible, and even expected, that they will grow in size by 50%! They’ll grow to 11mm during this week, and you should start to recognize a dorsal fin as well.

Week 4 is the point at which growth begins to slow. While your goldfish will grow significantly in week 3, they may only grow by slightly more than 20% in week 4 to reach 13.5mm in size.

Again, during week 5, you should only expect a 20 percent expansion. They’ll be about 16mm long at this point. During week 5, all of their fins will be fully developed, and their color will start to darken.

Growth is starting to slow down now. Your goldfish should be about 18mm long at this point (a 12.5 percent size increase). Their eyes should protrude, and any late bloomers should darken.

During week 7, not much occurs. You’ll recognize more growth; at this age, they should be 22mm in size.

You can predict your goldfish’s growth rate to slow dramatically after week 9. However, with the proper conditions, you can help your goldfish grow faster!

Is it possible for a stunted goldfish to grow?

To be truthful, how soon you modify the environment around your goldfish is crucial. If you notice that their growth has been slowed while they are still a juvenile, it is entirely possible to assist them in growing quickly.

Goldfish that have grown or have been stunted for a long time, on the other hand, may never reach their full size, and their growth may continue to be slow.

How Big Can Goldfish Get In The Wild vs. In A Tank?

Modern goldfish are assumed to be descended from wild Prussian carp and Crucian carp that originated in Central Asia, despite the fact that these fish can now be found in Europe, Asia, and North America. Goldfish, like common carp and minnows, are members of the Cyprinidae family of fishes.

Prussian carp reach an average length of 18 inches and weigh around 6.6 pounds. The species’ typical color is silver, but they can also be found in orange and gold morphs, which contributes to them being mistaken for pet goldfish that have outgrown their tanks and been released into the wild.

Why Do Wild “Goldfish” Grow So Big?

These wild goldfish relatives can grow to be enormous for a variety of reasons. Mainly, the water in which the fish live is typically cleaner than that of a home aquarium’s closed system. In addition, the water is well-oxygenated and is replenished on a regular basis with rainwater.

There is no restriction to how much food the fish can eat if the habitat has a plentiful food supply. There are few natural predators that bother the fish once they reach adulthood. Finally, the fish have much more space than they would normally have in a home fish tank.

What About Goldfish In A Tank?

There is some reality to the urban legend that the size of a pet goldfish’s tank is straightforwardly proportional to its size. Pet goldfish typically grow to be only a couple of inches long if kept in a bowl or small tank, and they do not experience the natural growth spurts that their wild relatives do.

Stunted growth can be caused by a number of factors, including:

Goldfish are incredibly messy fish, rapidly polluting their tank water. If you don’t have a reliable, well-maintained filtration system, levels of ammonia, nitrites, and nitrates rapidly accumulate in the water, poisoning or shocking the fish.

Goldfish require a varied diet that includes plant matter, algae, and meaty foods. A flake food diet is insufficient to provide the fish with everything they require for ideal health and growth. When you compare the diet of a typical pet goldfish to that of a wild carp, you will notice a significant difference.

So, with adequate care and the appropriate size and aquarium setup, there’s no reason why your little baby pet goldfish can’t grow to be a full 12-inch.

As a result, there is no valid answer to how quickly your Goldfish will grow. Because goldfish develop to the size of their tank, it really depends on the size of the tank.

The size of the tank, however, is not the only factor influencing the growth of the Goldfish. Goldfish growth is also affected by how well you maintain your tank.